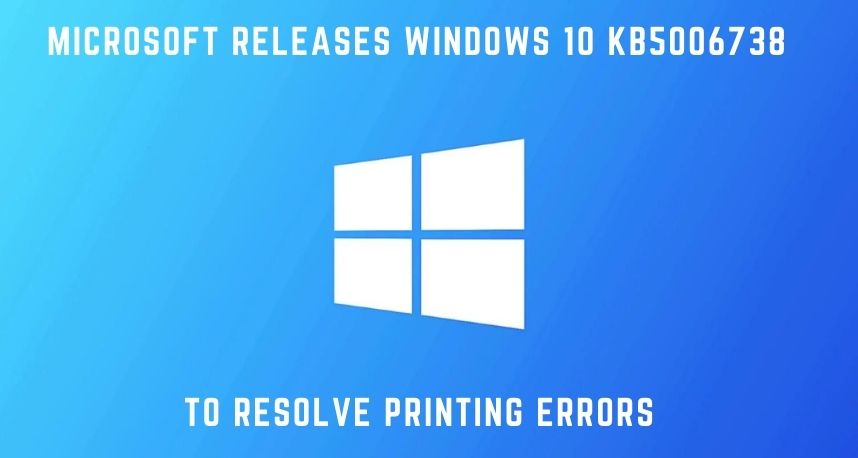 Windows is one of the most reliable operating systems in the entire world. Additionally, it has to face controversies when the security updates prove to be buggy. If you are a Windows 10 user, then you might have witnessed at least one bug in your lifetime. It can be related to raising issues to printing tasks or leading BSOD in your Windows devices.

Whatever the bug is, the prime concern should be that you have to resolve the bug or roll in the previous update on your Windows computer. According to Printer Repairs Dubai, a similar issue called PrintNightmare appeared on Windows computers recently, and users couldn’t print appropriately for this error.

Microsoft has claimed that Windows 10 KB5006738 and an individual Windows Server Preview update will be enough to resolve any printing issue. KB5006738 is a significant part of Microsoft’s September 2021 C monthly update, according to the Printer Repairs Dubai experts. Users can test such updates before they are officially released in the upcoming month of November.

You might have heard of Microsoft’s Patch Tuesday updates. C preview updates are not like them, and they are optional. Users can only install them if they are suffering from a particular issue because of the previous update. Additionally, C updates don’t come up with any kind of security updates.

The important factor regarding Windows 10 KB5006738 update is that this update won’t be automatically installed on your computer. As this is an optional update, you have to manually install it. If you are suffering from multiple printing issues currently, then it will be better to opt for this update. Take help from Printer Repairs Dubai experts.

Here’s how you can successfully install the update on your Windows 10 system:

Afterwards, the Windows 10 computer will start downloading and installing the update on your computer. Your Windows PC might take a reboot and start everything fresh. You can check if the update has successfully mitigated the PrintNightmare issue.

In case you can’t find the Windows 10 KB5006738 update, then you can sneak into Microsoft Update Catalog. The update is available, and you have to manually install it.

What Caused Microsoft to Come up with Windows10 KB5006738 Update?

Microsoft has also released KB5006745 to address some other issues. Cumulatively, these two updates are destined to resolve printing errors faced by an enormous number of users. Here are the required corrections from these two updates:

Is Windows 10 KB5006738 Capable of Fixing All the Printing Troubles?

The experts have witnessed 20 improvements with Windows 10 Update Preview KB5006738. Here we have mentioned a few:

Well, those are a few of the major fixes and improvements that Windows 10 KB5006738 has brought. In case you are struggling with unexpected printing issues, then you should install the preview update from the Microsoft Update Catalog and check if they prove to be useful.