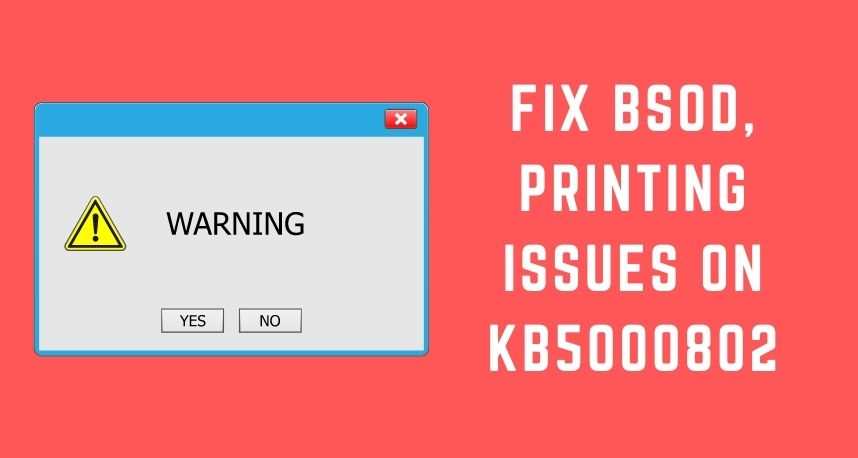 Microsoft had to struggle a lot due to buggy security updates. And, this time, it has come up with Windows 10 KB5000802 update. Recently, Microsoft decided to release this update which led the Windows 10 device to collide with the blue screen of death issue. Additionally, the device has started showing glitches while connected to a printer or printing.

And, after research, experts of Printer Repairs Dubai confirmed that the Windows 10 KB5000802 patch was responsible for all this. If your Windows 10 computer has installed the same patch and you are facing similar issues with your system, then we’ve great news. Microsoft has already found a cure to this patch. So, let’s understand the details to resolve the issue.

Reportedly, the Windows 10 KB5000802 patch was causing two major errors – ‘win32kfull.sys’ and ‘APC_INDEX_MISMATCH’ errors. Apart from KB500802, other updates released on March 9 had similar issues, such as KB5000803, KB5000808, and others. This occurred while printing on renowned printer brands such as Ricoh, Kyocera, etc.

On the other hand, Windows 10 KB5000802 update was a hiccup for printing mechanisms that were software-based. The prime objections arise from Notepad, print to PDF, and LibreOffice functionality. However, the solution to the error called ‘APC_INDEX_MIMATCH’ has been released.

As users reported the issues to Microsoft, the tech giant came up with a dedicated solution to remove the bug from the device. Those who have already downloaded and installed KB5000802 on Windows 10 devices have to download another latest patch from Microsoft.

Recently, Microsoft has published the Windows 10 KB5001567 update. Users have to download and install this update to recover from what has been going on with their Windows 10 PCs due to the previous update.

If you are a user of Windows 10 earlier versions, such as 1909, 1809, or older, then don’t worry. Microsoft has released Windows 10 KB5001566 update to address the ‘APC_INDEX_MISMATCH’ issue. Here is the detailed information about the Windows 10 versions and the updates that you require from Microsoft to fix them.

Steps to Get the Solution from Microsoft

Microsoft has ticked Windows 10 KB5001567 update as optional. So, it means that your Windows 10 computer can’t locate the update and download it automatically. You have to manually download and install the update on your computer.

Microsoft has provided its users with the necessary steps to execute the process against the win32kfull,sys error:

After your computer completes the installation process, it requires a restart. Let your system reboot, and now, you can try printing, using your computer. Check if the issues are still there.

If the update is not getting installed through the above-mentioned steps, then you have to take the help of the Microsoft Update Catalog. Find it on the internet and locate the compatible download links for your 64-bit or 32-bit Windows computer.

Users have complained that some of them are facing issues even after downloading the Windows 10 KB5001567 update. There are chances that the root of the issues are somewhere else rather than the previous Windows 10 update.

Hence, you have to try different fixes to solve the trouble. Here are a few dedicated solutions for the BSOD and printing issues.

Work with the Printer Configuration

Perhaps, the printer driver is incompatible with the latest version of Windows 10. You can try out the following guidelines for fixing the printer issues:

Check if it’s still causing a BSOD error, then you have to uninstall the driver. Additionally, install a PCL 6 driver for your printer.

If Nothing Works, Simply Uninstall KB5000802

If you have checked everything and nothing is working to resolve the BSOD error, then there’s no other way rather than to uninstall Windows 10 KB5000802. According to Printer Repairs Dubai professionals, this method should work. First, go to Settings. After choosing Update & Security, opt for View Update History. Now, choose Uninstall Updates.

From the list, go with the KB5000802 update. Continue with Uninstall and wait till it completes. Your PC might require a reboot, after uninstalling the Windows 10 KB5000802 update. Hopefully, this will work for your Windows 10 computer and it will be free from the BSOD, printing errors.